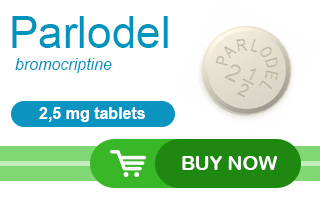 Parlodel is an ergot drug. It is indicated to treat Parkinson’s disease. Sometimes it is used alone while sometimes in conjunction with other drugs like levodopa. Parlodel works by improving the movement and decreasing the stiffness, tremor, unsteadiness and slowed movements. It also helps to shrink the number of episodes of attacks that disables the patient to move (on- off syndrome). The generic name of Parlodel is Bromocriptine mesylate.

Parlodel is used in:

Mode of action of Parlodel

It works by decreasing the levels of certain hormones released in the body like prolactin. When the levels of prolactin are abnormally high, it may lead to certain problems in the body like unwanted breast milk, trouble in getting pregnant, stooped or missed menstrual cycle, decrease in sexual activity and decrease in sperm production. Bromocriptine helps in lowering down the unusual hike in the levels of the hormones like prolactin and growth hormone but, it is not capable of curing the cause of the hike in production of these hormones.

How to use Parlodel?

Parlodel is indicated to use orally. It can be taken with meal or as suggested by the doctor. It should be taken one to two times regularly. The drug dosage is decided by the doctor in accordance with the condition and response of the patient towards treatment.

The treatment is started by low doses that are gradually increased. Sudden withdrawal of the drug may lead to severe withdrawal symptoms like fever, confusion and muscle stiffness. Thus, it is always recommended to reduce the dose before stopping it altogether.

Side effects of Parlodel

The use of Parlodel causes minor side effects like:

These side effects do not pose any major problem. But, if they are persistent or worsen with time instead of getting resolved, you must consult your doctor.

The serious side-effects of this drug are:

Some people complain of falling suddenly asleep during the course of their treatment. They are recommended to stay away from activities like driving.

The medication should be taken in pregnancy only when clearly indicated by the doctor. If you are pregnant or plan to become pregnant, you must discuss it with your doctor before taking the drug as this drug may cause increase in blood pressure during pregnancy.

The drug may pass into the breast milk and hinder the baby. So, it is not advised to lactating mothers.

A drug widely used for treating Parkinson disease, Parlodel is also used for certain conditions caused by too much prolactin in the blood, abnormal growth of certain body parts and certain menstrual problems.

Parlodel should only be taken as per the doctor’s prescription.

It is better not to miss a dose. But once you fail to take a dosage and remember it, you can take it. However, you should not take two dosages. If it is time for the next dose, skip the missed one and continue with the regular schedule.

Drowsiness and dizziness can be caused by Parlodel. If the drug is taken with alcohol or some other medication, the effect can worsen. Better do no drive after taking the drug until you fee comfortable. The drug should not be used by persons for whom it not has been prescribed.

Discuss with the doctor all your health conditions like allergies to specific food, medicines or any other substance. You have to tell the doctor if you have irregular hart beat, coronary artery disease, angina, kidney or liver diseases, high blood pressure, history of vision problems, blood vessel narrowing of the legs and arms and heart attack.

It should be taken note that Parlodel should not be stopped without the doctor’s advise.  For example if the drug is being taken for brain tumor, there is a chance for the tumor to grow again if the drug is stopped suddenly.

Parlodel is also known to lower the effectiveness of birth control pills. Parlodel should be used with caution in children younger than 15 years.